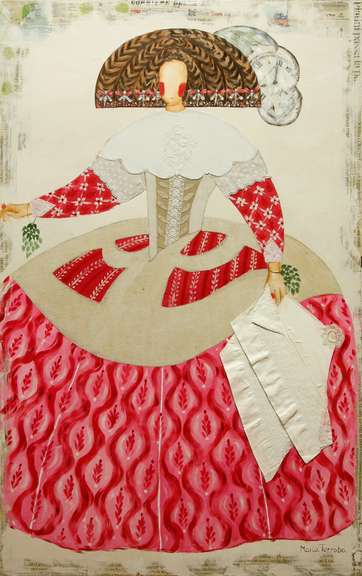 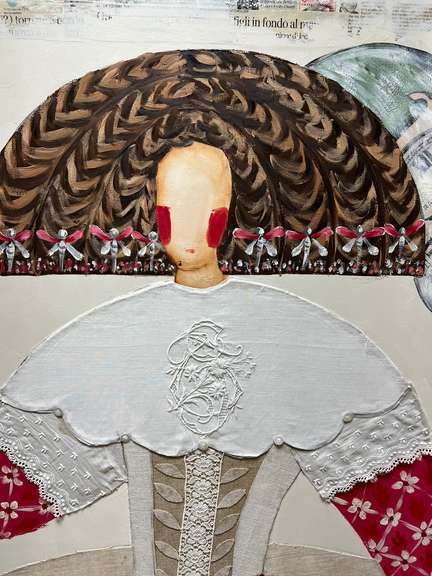 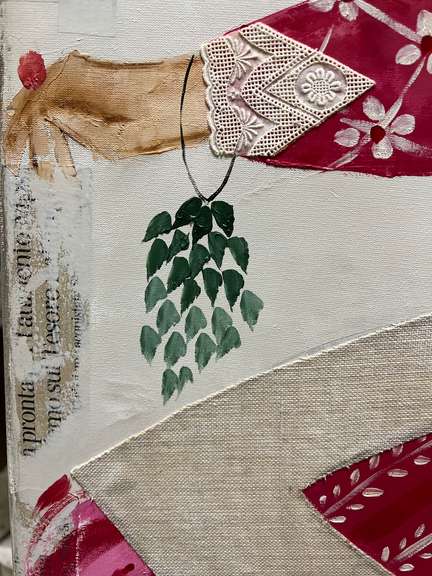 Current Bid:
LOG IN TO BID
Bid Increment:
$250.00
Beautiful Mixed Media Historic Figurative Work
This item originally had a reserve of $8,950.00 however the client is very motivated to sell and is considering all bids.

This painting is in excellent condition and has only been shown in a gallery. Mariana Intense Pink includes an antique handkerchief and collar that both include embroidery. In this work Torroba pays homage to Spanish Baroque master artist Diego Velazquez.

Maria Torroba’s interests in design, collage and art history combine to create unique artworks that look to the past in order to portray the present. After studying art for a year in Oxford, England, Torroba became interested in famous portraiture by artists such as Italian Renaissance painter Domenico Ghirlandaio, English Tudor court painter Master John, and the iconic Spanish Baroque artist Diego Velazquez. Inspired by history, Torroba’s work re-examines antique portraiture. She is particularly interested in fifteenth- through seventeenth-century paintings of royal and aristocratic families, including Giovanna Tornabuoni who patronized arts in Italy during the 1400s, the notorious sixteenth- century English queen Mary Tudor, and Mariana of Austria, wife of King Philip IV and whose portrait by Diego Velazquez in 1653 remains as an emblematic display of the wealth in the Spanish Empire.

In order to imbue her works with a modern appearance, Torroba includes an array of materials in a collaged format. Combining hand painted imagery with linen, oil, silk, lace, embroidery, advertisements, periodicals, and sometimes even jewels, Torroba’s works come alive and her characters re-emerge as contemporary icons. This reference to modernity is found throughout each image with items such as current newspapers, fashion magazines, and cell phone advertisements. Torroba harmonizes the variegated materials by reusing fabric in several areas of each painting, such as creating a large flowery broach from the same cloth used to embellish the sleeves of the sitter’s dress. The signature abstracted faces of the portraits provide just enough anonymity towards the identity of each figure, thus bridging the gap between historical portraiture and unique modern art.

This item originally had a reserve of $8,950.00 however the client is very motivated to sell and is considering all bids.
Size: 63x39 Inches

This item comes with a third-party certification of authenticity guaranteeing the description of the item.

**WIRE ONLY** To ensure fraud protection security for our buyers and the selling agency, payment must be made via bank wire only within three business days of the auction closing. No other payment forms are accepted for this lot.